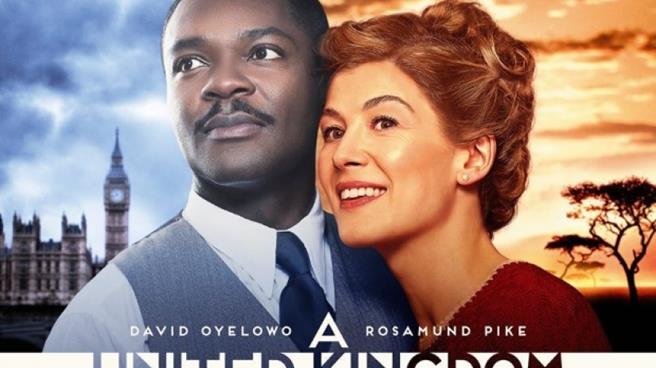 I am happy to report that I was enlivened and inspired by a most fortuitous happening.  I had watched Charlie Rose on TV interview the producer/actor David Oyelowo, the director Amma Asante, and the actress Rosamund Pike, all of the newly opened movie A United Kingdom. The title was for this Brit an enigmatic twist on words that drew me to the opening night of the movie in New York.

This is true story about Prince Seretse Khama, who is to become King of Bechuanaland, now known as the Republic of Botswana, but he marries a white English woman contrary to the wishes of his family, his tribe elders and the ruling British parliamentary advisers as well as the South African government. Formerly a British protectorate, Bechuanaland officially became independent Botswana in 1966.

This is a beautiful love story and shows how this mixed race couple set the world of racism on fire. It is their love and sacrifice, their patience, their devotion to service and to each other, that ultimately gives rise to the overturning of apartheid in Bechuanaland, makes way for democracy and unites the people.

This all actually took place in 1947, but it is a tale seldom told and held up to the light. Certainly it was not Britain’s shining hour. Nonetheless, the emergence of this movie is so timely now. To see how racism, imperialism and intolerance can be overcome by unconditional love underscores the true purpose of this shift of ages in which we find ourselves. Of great interest is that the female director, Amma Asante, brings to the fore the hard work and devotion of the wife and the female members of the tribe! This is a MUST SEE!

As if the movie and its message were not enough, a surprise awaited me. After the movie finished, the leading actor David Oyelowo, a British Nigerian actor and one of the producers came in front of the audience and spoke of how the movie was made, his background, and all was followed by Q and A. Mr. Oyelowo’s devotion to the movie and hgih consciousness were quite apparent. There was no animosity, just the desire to present the truth through the eyes of love. When he walked past my seat I took the opportunity to congratulate him and he gently tapped my shoulder in acknowledgment.

Yes, it is good to know that there are higher forces at work and there is a Divine Plan for humanity. That this movie has come out now shows that there is hope, no matter how difficult things may seem. There is always a price to be paid, a fight worth fighting, and it will be worth it in the end. How marvelous will be the day when we shall all look past race, creed, nationality, gender and age and see a divine soul under Grace, a reflection of Self.