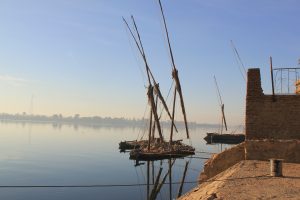 The Nile is arguably the most famous river in history. Its predominant source of water is presently the Blue Nile in Ethiopia, discovered in 1872 by the Welsh journalist and explorer Sir Henry Morton Stanley of “Dr. Livingstone, I presume” fame. Flowing north, the Nile River carves its way through nine countries before it reaches Egypt and the Mediterranean Sea. The Aswan Dam, near the border with Sudan, was completed in the 1950’s to control the river flooding, to provide water storage and to generate hydroelectric power. From the riverside towns along the Nile one may journey inland to visit the pyramids and temples in the reaches of the desert.

We enjoyed three days of beautiful, smooth cruising on our memorable Nile cruise. Overwhelmingly, my impression of this time upon the water was of the momentum and light of the Nile, its waters shining as “living waters”, providing life along its banks and beyond as it has for thousands of years. From the open top deck we could comfortably view green farmlands and small villages on either side with golden hills behind.  Amplified mosque prayers would occasionally break the pristine silence, drawing our attention away from the activities along the banks and the grass and reed-covered islands. Along the banks we could see donkeys, horses, cattle and goats, and the occasional camel, often tethered in the shade of palm trees, waiting to be loaded up with the crops being gleaned from the fields by the farmers who were not numerous in numbers.  I observed many different types of birds swooping along the waters, including swallows, falcons, cranes and large black and grey crows that sometimes landed on our ship balustrades. Occasionally we would espy a felluca under sail or a fisherman’s rowboat near the shoreline, but the Nile itself was not a crowded thoroughfare.  From our decks the fields beckoned with their green crops of sugarcane and cotton contrasting with the dark, silt-rich earth, still an important resource for the Egyptian farmers.  For those three days, our Nile cruise provided blissful blue skies, fresh winds and a marvelous tranquility.  Afternoon tea served topside with delicious Egyptian lemons and with English-style biscuits were a delight. The fresh dates, sea bass and other fresh foods served daily were greatly appreciated too. This was a time for much needed rest and relaxation.

The Egyptian’s dependence on domesticated animals is not limited to the riverbanks.  Horses and donkeys battle their way through the streets of Cairo too, pulling over-laden cards. Cats and dogs roam the streets and are still watched over, although they look for food in strewn heaps of garbage.  One animal of worship, that for the Westerner is perhaps the greatest curiosity, is the crocodile.  The Nomos Ombites in 2 B.C. worshipped the crocodile god, Sobek, who would devour the lower and sinful energies of man.  On our tour we visited a temple at night, Kom Ombo, built by Tuthmosis III, in honor of this crocodile-headed god. Here there is also a Hathor chapel and images of goddesses sitting on birthing chairs and a variety of medical instruments may be seen.  Mummies and sarcopaghi of crocodiles were found close by the Temple. Of note was that our group found this temple to be particularly activating.

It was inspiring to see and understand firsthand how the ancient Egyptians understood the Nile to be a spiritual, living entity.  The size and beauty of the river and the life-force it provides are a wonder. How blessed we are in the West to have an abundant supply of water, our earthly lifeline.  For a northern dweller like myself, when I witnessed such abundance of water close to the equator, a tremendous appreciation and gratitude settled in my heart. Of course, we must all take steps to maintain the purity of our water supplies around the world.

It was time to let the energies of my silver Rising Star pendant merge with these waters and I threw it out as far as I could from the bow of the boat.  This Rising Star symbol of Christ Consciousness, formerly known as the Minjushri healing system, twinkled in the sunlight before it dropped below the surface.  I had chosen this location for we were adjacent to the Temple of Luxor rising up on the bank. Luxor is the seat of the Ascension Flame, overseen in the etheric realms by Ascended Master Serapis Bey.

The reverence of the Ancient Egyptians for the Nile correlates to their concept of the journey undertaken by a mummy in a catafalque (a type of funerary bier resembling a boat) drawn by cattle in the afterlife.  In temples and tombs everywhere, the hieroglyphs and carvings illustrate such a procession of a pharaoh to meet the gods after death. On the way, the departed must encounter certain gates or power points and prove his worthiness in order to become ultimately identified with Osiris. The ancient Egyptians believed the mummy or soul of the departed would be met by the “ba”, a bird with a human head. If the departed was judged to be sinful, the Devourer a hybrid beast, crocodile headed, with the fore legs of a lion and the rear of a hippopotamus would deliver his fate.

On this memorable cruise we passed through a lock, the Esna lock, on our way to the Temple of Horus at Edfu. During our slow passage, vendors in row boats came around the boat trying to sell us scarves, tablecloths and anything else they had at hand.  A young man, tried his best to have me buy something alongside my cabin window. I succumbed and when trying to break away, he said in his best English accent (that sounded like Eliza Doolittle cockney): “Lady, me very sexy, take me to America.” He asked for a gift so I threw a tangerine down to him.  He was hungry. Up on the bow of the top deck, I heard the same voice, along with other vendors, all of them tossing up plastic bags of goods some 40 feet or more. These tempting missiles were accompanied by a pleading and persistent banter!

Finally at Edfu, the Temple of Horus, some 3,000 years old, with its enormous entrance pylons of sandstone and enclosed gateway is guarded by two stone falcons, the bird associated with Horus, the son of Osiris and Isis. This temple is noted for its varied archaeological influences. Here again, we noted the energies of the inner courts. Horus is known as the god of the sky, the god of war and the god of protection, his wings are often shown extending around or over a pharaoh; his consort is said to be Hathor, whose presence is venerated in so many temples we visited. The wedjat, or eye of Horus, is seen today on amulets and trinkets everywhere to ward off evil.  The wedjat would grace the bow of the ancient Egyptians’ ships to ensure their safety and victory on the graceful Nile.