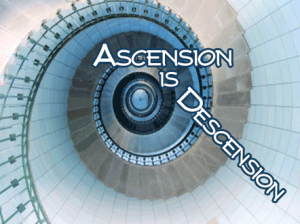 When we speak of the Ascension process of Mother Earth and all her life forms, including humanity, we associate this with a rise in consciousness, an increase in vibration and an upward spiral through the dimensional layers of being. When we think of the ascension of Jesus, or his transfiguration, or Enoch’s being “taken up” in a chariot, we automatically think of the process of Ascension into the heavenly realms as being one that is upward in mobility and in other facets of being.

When we understand that this is the first time in man’s sojourn on earth that the collective has an opportunity to truly embrace and embody a higher consciousness, i.e. the Christ Consciousness of the higher realms, without leaving our form, this means that the Ascension process we seek requires that we remain fully in our bodies. It means that we must be fully present in our physicality and be grounded in order to experience this expansion of being. This is truly what Ascension is about: Descension. In fact, we cannot hold the higher vibrational energies and ascend without being grounded in our bodies.

The work that we do to open and align our chakras, to allow the interfusion of energies between them and to maintain our subtle bodies, is essential for both upward and downward movement of energy. It is important that we do not solely seek the activation of the upper chakras (the heart and above) without also working to clear and activate our lower chakras. The lower chakras are not limited to the first, second and third chakras, but also and necessarily include our Earth Chakra located some six inches at the center point below our feet. When standing upon the earth, this brings the realization that our energies extend down into Mother Earth herself. While this may seem an obvious conclusion, it is often overlooked. In fact, man’s connection to the earth below his feet and at the same time to the higher dimensions above and beyond his physicality, is the goal of Ascension. Think of yourself in between the two, like a tree, drawing sustenance from below and drawing life force from above.

The fifth dimensional paradigm that we aspire to achieve and maintain on a collective level, is Unconditional Love – both an energy and a consciousness. We have access to much information about each of the dimensions now, and we look forward to this ascent of spiritual awareness up to the twelfth dimension and beyond. The fifth dimension is an important stepping stone for humanity in order to resonate with the cosmos and other Christed beings of Light. At the same time, however, we remain connected to the first, second and third dimensions which are supporting us within, through and upon Mother Earth, respectively. We are in the unique position to be the link between heaven and earth, the conduits for Ascension in both the physical and metaphysical sense! This is a very exciting time!

I trust and pray that man is healing his relationship with Mother Earth and all her life forms. Forces have been at work for millennia to alienate man from his connection to God, by instilling the need for mediation through the Church, and severing his symbiosis with the earth below, by instilling a fear of hell and what lies below unseen. Sacrificial blood, both human and animal, and hell-fire for sinners became a means for a few to control the masses, just as empirical enslavement brought wealth to a few. Warfare and bloodshed widen the gap between man and the earth, but there is a purging taking place as we shift to the new paradigm.

Man’s self-reliance and the resultant inflation of his ego, and his belief in materiality, detracted from his understanding of his role on Mother Earth. He lost sight of the fact that the elements, the chemicals, minerals, the microbes, and earth’s energies exist in a balanced ecology. The elementals of earth, air, fire and water and even the fay folk of the second dimension exist to help maintain the energies at the earth’s surface. That these telluric realms above and below the earth’s crust serve humanity was almost lost and forgotten. But truth will out!

The persecution of those souls who worked in the past  with any or all of such energies whether visible or invisible does not bear repeating. Perhaps you suffered as one of them. We owe a debt of gratitude to those who were labeled pagans, witches or heretics, to those who worked to maintain man’s symbiosis with heaven above and earth below and who suffered for it. It is a wonder, is it not, that indigenous people around the world have continued to survive living close to the earth, functioning as a bridge between the two, unmoved by materiality? Yet “civilized” man still plunders the earth for her resources without thought of depletion, destroying ecologies for profit and abusing animals for vanity and satiation. The earth is so much than a source of food and fuel. Now is the time for us to restore harmony within ourselves and cooperation with each other for the benefit of all.

We must be in the NOW and fully descend into our bodies in order to heal our relationship with Mother Earth. As we hold the higher energies and facilitate Ascension for ourselves we assist the planet, as the planet assists us. Those individuals who love and work with crystals know that the earth energies they access bring consciousness, healing and records of information from within the earth. Thus participating in earth healing ceremonies has far greater effect than is commonly understood. As above, so below.

Mother Earth holds the resonance of past civilizations and man’s history.  Man’s dreams and visions for the future and his emotional emanations are held within the collective unconscious that registers in the fourth dimension. Our transition to fifth dimensional Unconditional Love is  triggering our unconscious beliefs, pain and desires to come to the fore. The turmoil we are witnessing all around us is a necessary global purging to make way for the new Golden Age (The New Camelot). Mother Earth is the key to our future and our Ascension.

Meditation: So let us focus on the Earth Star chakra beneath our feet and send a cord of energy down from our root, down to the Earth Star and then deep, deep into the core of the earth.  Place an anchor at the bottom of your cord and hook it firmly onto a rock deep in the earth. See and feel it connected there. Breathe the earthly energies up back into your body, through your chakras, up and out of your crown chakra and connect to the universe above and beyond. Breathe this circuitry up and down, feeling your connection to all that is below and all that is above.

Affirmation: Thank you Mother Earth for the love, support and sustenance you provide me. I bless and cherish you.  Please accept my love and deep gratitude.

Words of Wisdom from Merlin on this topic:

The time has come for a renewed perspective towards Mother Earth and all her life forms. No more is it necessary to fear the unknown or the unseen. Your own love and faith will steer you towards your human evolution and the creation of a new world. Mother Earth is purging the burden of old negative forces that have plagued mankind. Most of you have an awareness of the incredible gift to humanity that Mother Earth represents. She is a school that is transitioning into a cosmic university that attracts millions of souls to tread upon her surface. Treasure your time upon her and send love to her depths. For her place within the cosmic order is dependent on you and in return she is serving you and facilitating your journey of Ascension.