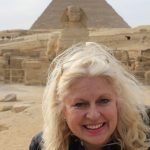 Born and educated in England, Alison James resides in the United States where she pursues her spiritual path as an Author, Channel, Healing Facilitator, Metaphysical Teacher, Non-Denominational Minister, Ascension Energy Anchor and Cosmic Code Activator. She is a follower of Derek O’Neill of Dublin, Ireland, and of His Holiness Sri Sathya Sai Baba now in the heavens. As the female earthly counterpart of Ascended Master Merlin, Alison works in Oneness with him for their shared mission during her lifetime. Her goal is to be of service to the Light as Spirit guides her.

Alison received prophetic training in the Prophetic Order of Mar Elijah, Church of New York, as well as in mystical studies, astrology, numerology, Kabbalah, sacred geometry, psychometry and divination. In her workshops and teachings, Alison speaks on a broad range of spiritual and metaphysical topics, including man’s connections to ancient civilizations and the planets within the Cosmos. In her role as Ascension Energy Anchor, she invokes her own energies as well as those of the Cosmos to assist the Ascension process for humanity and Mother Earth.

Alison is presently working on the sequel to her first book, Merlin and The New Camelot; the Birth of Collective Christ Consciousness, entitled Merlin’s Alchemy for The New Camelot.