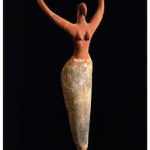 The Metropolitan Museum of Art in New York City is currently showing a fascinating exhibit that took some three years to assemble. Dawn of Egyptian Art features some 190 works of art, including sculptures, vessels and figurines dating from circa 3900 to 2649 BCE, Egypt’s predynastic and early dynastic period, from sites stretching from Hierakonpolis of Upper Egypt, through Naqada and Abydos, to Saqqara and Heliopolis at the mouth of the Lower Egypt Delta and Munagat within the Delta itself. Even with hindsight, we may have a limited sense of the time and people who lived before the construction of the iconic pyramids and temples and their ruling gods that we have come to know. Writing was in its infancy then. We may not even conceive of life before the sacred sites of Egypt. But in this exhibit we can view an array of objects that are derived from grave sites and temples predating the evolution of the pharaonic dynasties and their ruined sites we visit today. A dozen other museums in the U.S. and Europe have contributed to this magnificent collection.

The artifacts on display are almost entirely focused on and decorated by the animals, birds, plant life and landscapes that were prevalent at that time and on which the ancient Egyptians depended. Living in the verdant vegetation of the banks of the Nile, long before the necessity of the Aswan dam, the animal kingdom flourished and was, no doubt, a wonder to behold.  On display in the exhibit is a pair of mating turtles, mating hippopotami (recognized for fertility), crocodiles, fish, lions, a splendid large white alabaster baboon (that we connect to Thoth), jackals (that we connect to Anubis), dogs, elephants, giraffes, antelope, donkeys, flamingoes, cows and horned bovids, falcons (that we connect to Horus), vultures, ducks, guinea fowl, a large frog, scorpions and all manner of hunting scenes.

The amulets, sculptures, vessels, palettes and stelae clearly illustrate how the animals were a part of the Egyptians’ lives and a part of their death journey. The detail and beauty of this collection leaves no doubt as to the esteem in which the animal kingdom was held in the eyes of the people.  Much of this coterie was unearthed from graves, together with funerary masks. Also, one can easily infer why the spirit of the animals was later incorporated into the representations of the dynastic gods of the succeeding pharaohs and why these animals accompanied them in death.

Human figurines, standing and sitting, are numerous, depicting women and children; male figurines are wearing protective coverings over their genitals. There is a standing vase formed of two breasts telling us, I believe, that these Egyptians honored the sacredness of woman.  The fertility of humanity and the land were crucial for survival and were revered.

Among the objects of ritual and worship are many animal fetishes and, of interest, a libation dish shaped in the form of an ankh.  Liquids would be swished through the dish, passing over the symbol before use.

For me, however, the most significant highlight was “Bird Woman” loaned by the Brooklyn Museum’s “Egypt Reborn: Art for Eternity” permanent exhibit. This terracotta painted figurine dated circa 3500-3400 BCE has the body of a woman and the head of a bird, with arms extended upwards (in adoration perhaps). Here is early evidence in Egypt of the recognition of woman worshipping, seeking oneness with the gods and carrying the wisdom of the gods (through the bird head). Like Thoth, the Master Magician, whose bodily form is male and whose head is that of an ibis, we can see that “Bird Woman” too was recognized equally at this time. Later, Mother Isis would be depicted with outstretched wings.

A similar figure of a bird man is also to be found here, but better known perhaps is the “bird man” and the ritual that still takes place on Easter Island (Rapa Nui) today. Bereft of trees, the island became almost birdless, but as the “myth of the bird man” tells us, a sacred bird, the Manutara, and her eggs, was saved from the hungry people of the island. In remembrance today, the men swim to a small island (Motu Nui or “bird island”) to search for an egg. The winner returning with an egg becomes “bird man” for a year. In various rock carvings found in caves and crater sites on Easter Island, the image of a man with the head of a bird was found alongside other mysterious Rongo-Rongo hieroglyphics. The derivation of the bird man remains as much an enigma on this remote island as the massive stone heads (the Moai) themselves.  However, I believe that both “bird man” and “bird woman” are representations of messengers from the skies and from other dimensions, i.e. star people and our cosmic ancestors.

“And you too may take flight from the limitation of human thinking. Your head may not be in the shape of a bird, and yet you may learn from the wisdom the birds hold.  Man, woman and child will come to know the truth of his origins in the New Age of Light that is dawning imminently for Mother Earth and humanity.  Embrace your own inner wisdom as exemplified by the gods and beings of light who transcend time, civilizations and human consciousness.  This is an extraordinary time for you to allow your own self-reliance, wisdom and growth in service to one another, without separatism, in full knowledge that you are One with All There Is.  This wisdom has always been at hand for you to discover and now it is time to embody the wisdom of your soul.”