With Portal of Venus and the Telosian Skull 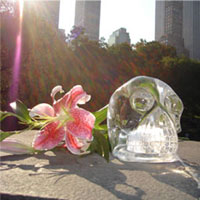 When you experience a personal channeling with me and my amazing Crystal Skulls, Portal of Venus or the Telosian Skull be open to receive the energies and consciousness of other realms. Edgar Cayce in his Guide to Gemstones, Minerals, Metals and More, gives us clues as to the history of the crystal skulls. As a Skull Keeper I can attest that they are used as access points to connect with Source and other Beings beyond the Earth plane. The skulls each have specific energies and a unique role to play. The Legend of the Thirteen Skulls continues to intrigue us. It is said that when the thirteen come together (a circle of twelve around the one) a portal of energies is opened. Ancient skulls have been discovered in Mexico, Central and South America and they connect us to the ancient Mayan and Aztec civilizations … and beyond. While speculation as to their specific origins still abound, one thing we know for sure and can witness today, is that they bring forth magical healing energies for those who are open to receive them.

Portal of Venus, made of reconstituted quartz comes from China. Weighing some 15 lbs, her crystal clarity aligns with tremendous energies, forming a conduit and a repository. I was blessed to channel Sanat Kumara, and Lady Venus at her unveiling ceremony several years ago. Since then, I may use her in a personal channeling session or invoke certain frequencies and cosmic alignments for healing, expansion and journeying. Portal of Venus has participated in many activations and workshops and accompanied me in 2008 to Mayan ceremonies at the pyramids and sacred sites in the Yucatan, Mexico.  Her brilliance and clarity contribute to her powerful presence. 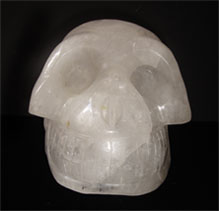 The Telosian Skull, also weighing some 15 lbs, is of white and clear quartz. With this skull, I found myself attuning to Master Adama, the High Priest and leader of the Telosians, (the Ancient Lemurians) whose energies may be found below Mount Shasta. It is important to remember, however, that there are no limits or confinements in Spirit. Rather, crystalline energies connect us to the Universe and our infinite crystalline presence. It is no accident that the skulls have emerged at this time to form a bridge to greater levels of being for us. Come explore with me!