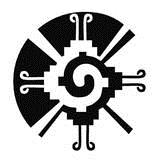 “There is nothing in a caterpillar that tells you it’s going to be a butterfly.”
~ R. Buckminster Fuller

However, a caterpillar holds within the blueprint of the butterfly. Read here how the Galactic Butterfly (image above) holds a universal blueprint. May your journey be light.

“This symbol is called the Galactic Butterfly which is said to represent all of the consciousness that has ever existed in this galaxy. This is all of our physical ancestors both human, animal, reptile, fish, shell fish, plants as well as the consciousness which organized all of the raw material from a whirling disk into stars then planets and solar systems. Big Meaning. So big that the original Maya had no symbol for this. In their civilization it was like having no name for God. Just knowing the concept was good enough. Later this pattern was devised by Toltec or Zapatec weavers as a pattern for blankets and this is where Jose Arguelles came across it. He called it Hunab Ku. The indigenous peoples call it “The Galactic Butterfly”. Butterflies are seen as ancestors returning for a visit to physicality. Wearing one of these symbols is very powerful as it broadcasts your reaching to actively join the consciousness of our galaxy.” ~ Ian Yel Lungold