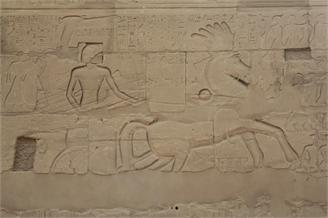 I took the photo above at the Karnak Temple in Egypt last month. It is a familiar image of a charioteer in battle with a horse wearing a decorative headdress. It is reminiscent of Arjuna and his story in the Mahabharata. Moreover it is a reminder that we too are charioteers and must fight the good fight towards higher consciousness and self-mastery.

The pharaohs of Egypt liked to immortalize their battle victories and importance with carvings such as this.  Whoever they considered of lesser importance, such as their enemies, were made much smaller and often illustrated below their feet. The pharaohs’ enormous carved temple effigies were intended to strike awe and fear into the heart of the onlooker. Such self aggrandizement, of course, is not the way of the spiritual warrior but it is an out-picturing of man’s inner battle.

It seems to me that March has entered at a bristling pace here in New York, with strong, fresh winds and clear skies. As we approach the Spring Equinox I feel a deepening call to be that spiritual warrior, bringing forth the message of the New Golden Age, The New Camelot (as I am wont to say). Things are changing and moving quickly worldwide and it would appear that truth is pushing up and out like the lotus flower from deep under the mud. There is a fierce, independent yet loving and delightful aspect to all of this. It is the emergence of the Divine Feminine in all her glory!

At my workshop Merlin and The New Camelot last month in Guildford, Connecticut, Amerissis, the Goddess of Light and Lady of the Lake, made herself known to two particular individuals in our group who experienced her radiant presence and the removal of cords with her etheric sword.  Here was a brilliant and shining example of the Divine Feminine at work, being loving, gentle and incisive at the same time – quite marvellous!

This is how I think of the spiritual warrior at work and it is not dependent on being a man or a woman.  It is a way of being that we are being called to embrace, loving and in service to others, a manifestation of the “We Consciousness” of our new 5th dimensional paradigm. Please read Merlin’s channel below for a deepening of this awareness. Do join me at Kindred Spirits in Redding, Connecticut, next Sunday for another round!