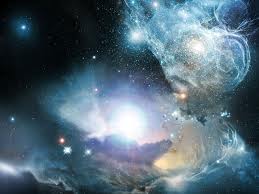 NASA image of a quasar, a very distant galactic nucleus that is extremely active as regards energy output.

In a swirling explosion of energy, the Universe unfolds and unfolds and unfolds. At the center of all its creations, nuclei of atoms and infintessimal energies emerge, mix and combine to fuel the creation of new worlds and form. It is a never ending cycle of creation, forever in motion. One life form bursts forth as another dies as the cyles of life and death move throughout the Universe. There is no thing that is not governed by the Light of Creation.

And so it is, beloveds, in your being, and in your world. Within your very own heart lies the Light of Creation, a vortex and stream of consciousness that propels you forward in the light of your being and in your creations. The essence of Light itself holds an energy and consciousness that permeates all things, a Light that emergies from the deepest, darkest Void and holds within it the seeds that will germinate when they fall on fertile ground. Each will bend, stretch and thrive to evolve into the mature form embedded within its DNA.

So it is with you. Your very being is Light, you live in the Light, you come from Light, and to the Light you shall return one day. The shadows that you struggle to embrace are but reflections of the Light. You are the Void and the Light, the giver and the receiver, the producer, director and player in your own light play. You are Divinity born of the Light of Creation. The light of your Higher Self oversees the light of your Creations, from the initiation of thought to the manifestation of all that you desire to bring forth.

How powerful you are, a Co-Creator with the force of the Light of Creation! What will be withheld from you, if you desire to create it? Nothing, I say, no thing. Allow the Light that is you, is in you and to which you belong unfold, unfold and unfold. That is the power of Creation that lies within you as your birthright.

In Love and Light,
Master Merlin”