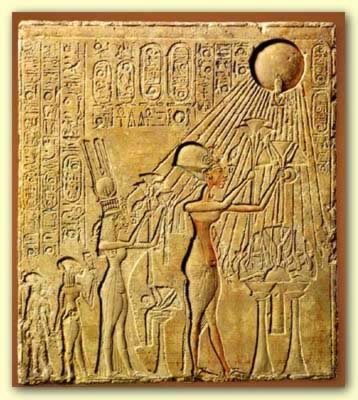 King Akhenaten (also known as Amenhotep IV) is pictured famously above worshipping the sun with his beautiful wife, Queen Nefertiti, and his family and with the rays of the sun radiating down. During his five-year reign, he introduced monotheism to the Egyptians and it is believed that he was the first king in the world to do so. Worship was then directed to the life-giving energy of the Aten, or sun, shown as the sun disk. He coined the name Akhenaten for himself, switching the country’s worship of the god Amun to the ‘One’.

Akhenaten moved the capital of Egypt from Thebes to Akhetaten, now known as Amarna. The controversy he caused is as debatable as his curvy form that, we believe, illustrates both his masculine and feminine attributes. The bust of his wife, Queen Nefertiti is one of the world’s most iconic and beautiful artifacts known to mankind.

No matter how things may look on the outside, the truth will out and the natural laws of the universe will survive. There may be periods of confusion, unbelief and doubt, but high above the storms of life, the sun is always shining, physically and metaphysically speaking. There is a reason for everything, n’est-ce pas? And there are always synchronicities happening if we can but allow ourselves to see them.

There is a well-known story of Carl Jung, the Swiss psychiatrist and psychoanalyst, who, following his dinner conversations with Albert Einstein, began to question how the law of cause and effect worked in circumstances of the paranormal. He was listening to a client speak about her dream of a beetle when suddenly an insect began clawing at his window. Lo and behold, it was a type of beetle that had landed! Carl Jung, in fact, coined the term” synchronicity” for such a happening. I think it is safe to say that the law of attraction was operating in this unforeseen and unpredictable way, all according to the laws of the universe.

The question is then, what are we attracting as individuals and as the human collective? What synchronicities are happening in our lives? The answer(s) may provide a shifting perception or a broader view of why certain challenges are in our lives at this time, both personally and collectively. If according to the Divine Plan, or Universal Synchronization, we understand that there is a reason for everything, then we can know that challenges are not intended as a punishment, but rather as a nudge (or knock-down!) to show us something or to help us make a different choice. Unfortunately, we are not privy to always know why! If we can accept simply that the sun is always shining, we can know that we will find it again.