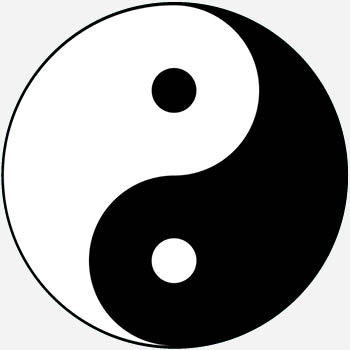 I am referring here to the Tao, the ancient principle of Taoism (also known as Daoism), a Chinese philosophy attributed to Lao Tzu (c. 500 BCE) that contributed to the folk religion of the people primarily in the rural areas of China and became the official religion of the country under the Tang Dynasty. Taoism is therefore both a philosophy and a religion. It is represented by the image above of the Yin and Yang or Feminine and Masculine principles where each wave of energy is wrapped around the seed or nucleus of the other. It illustrates how seemingly opposite or contrary forces may actually be complementary, interconnected, and interdependent. In our world we may interpret this further to realize that one force cannot exist without the other opposing force.

The Master Dow Crystal is described in detail under Mystic Crystal Revelations. The Tao and the Dow can both help and remind us of our necessity to stay centered and in balance. Remaining neutral in the face of exaggerated or polarized energies is a choice (until it becomes flesh so to speak) and it takes practice. Of course, we are all getting lots of practice at the moment! Fundamentally, we must understand that to be centered means to rest in a place of neutrality where the awareness of extremes is present but is not allowed to dominate one’s thoughts and actions. Preventing the emotional rollercoaster and suffering of life is the goal! To be or not to be, that is the question. Whatever your perspective in a given situation, your feelings will be giving you clues as to what your triggers and beliefs are. Are they causing you pain or discomfort? If so, then they need to be addressed. Emotional catalysts are Divine gifts within the Divine Plan for our lives, showing you what is out of balance within yourself. All is fair on the path to Sovereignty and Ascension!

As the Law of Action says, we create knowingness when we act, whereby doing becomes understanding. Blaming and railing at leaders or other messengers outside of yourself adds fuel to their fire:

WHAT YOU FIGHT YOU IGNITE.

Be still, take a breath, be responsible for yourself and choose:

BE THE SOLUTION, NOT THE REVOLUTION.

Be at Peace within and, like the Tao and Dow, realize that you are a receiver and a transmitter of Love, Peace and Harmony.  You are a being that is both human and Divine. Does this sound familiar? Choose what you want to manifest from a place of Love, not on what is being aimed at you or is drifting your way from mass consciousness. Your reaction is of equal importance to the outer stimulus you receive. It requires your presence of mind to not give a knee-jerk reaction. How you react creates your karma. Are you pouring fuel on the situation with your reaction or could you choose a different direction that serves you and the energy of Peace?

BE PROACTIVE, NOT REACTIVE.