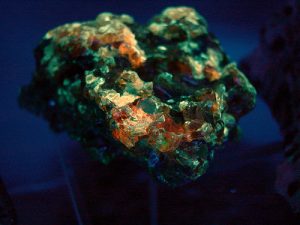 Zincite (Zinc oxide) is for Creativity.  Its manifested energies of creativity, formed mostly of zinc, are usually colored red, orange, yellow or green. They empower you to rise up, to be joyful, to feel inspired and to manifest what is in your heart. Zincite is a small yet powerful co-creator to have in your toolkit.

Fairly rare and not inexpensive, Zincite may be obtained in slim finger-like formations or it may be an accretion of granular crystals in hexagonal form with a heavy density. In either case, its vibration is quite remarkable for its size. It is found mostly in Poland and Italy and specimens have also been found at Franklin and Sterling Hill, near Ogdensburg, New Jersey.

Zincite is particularly sought in its red ray for activating energies and can be used as a potent wand. In its orange translation it is particularly used for the stimulation of creativity and to align the holder with talents and gifts lying within as well as to connect with one’s passion, whether sexual or materially inclined. Zincite highlights these gifts when utilized and the experience and joy of creation is brought forth. In its yellow and green incarnations, one can experience the added bonus of physical motivation and alignment with one’s Higher Self. Zincite provides an intense and activating presence for those fortunate to be in its presence.